The first electric Abarth is an incredible risk. It is supposed to replace the petrol icon. But it is slower, heavier, more expensive, and with a small battery it will offer a comically short range somewhere on the circuit or in serpentines. Even simulating the sound of an internal combustion engine will not improve its image. This is probably not an offer for the Italian Scorpion fan community. 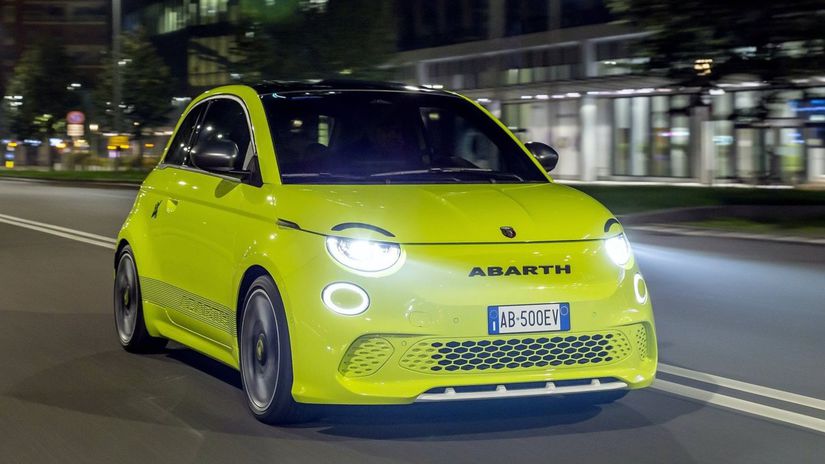 Even Abarth, famous for its sporty modifications of Fiats, did not escape electrification. However, in the case of a cult brand that has attracted a huge community of supporters to its “tuned” 500s, the transition to batteries is a bigger risk than for mainstream ones. The new Abarth 500e has very little in common with the Abarths 595 and 695. It will not provide the joy of shifting gears or the authentic sound of the combustion unit that Abartha enthusiasts absolutely loved. And certainly not at the price they were used to. This is simply a different car for different customers. Is it, so to speak, the answer to a question that no one asked? Or maybe the “Abrathists” wanted an electric car? 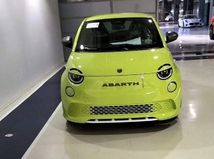 Read more Abarth is playing ‘vabank’: The image of the first electric news has leaked!

Given this dilemma, we expected greater commitment from Abratha. At least the fact that it will make the most of the advantages of the electric drive and that its first electric model will literally crush the gasoline model with its dynamics. It didn’t happen. The Abarth 500e has an electric motor with a power of 113.7 kW. That’s not really a stunning figure. After all, the basic Abarth 595 Turismo has 121 kW and 695 to 132 kW. Even with a torque of 235 Nm, the electric novelty does not stand out from the lineup in any way. Gasoline versions normally have a torque of 220 to 250 Nm. The result is acceleration from 0 to 100 km/h in seven seconds. That’s a significant improvement over the electric Fiat 500e, of course, but not over the Abarths 595 and 695. 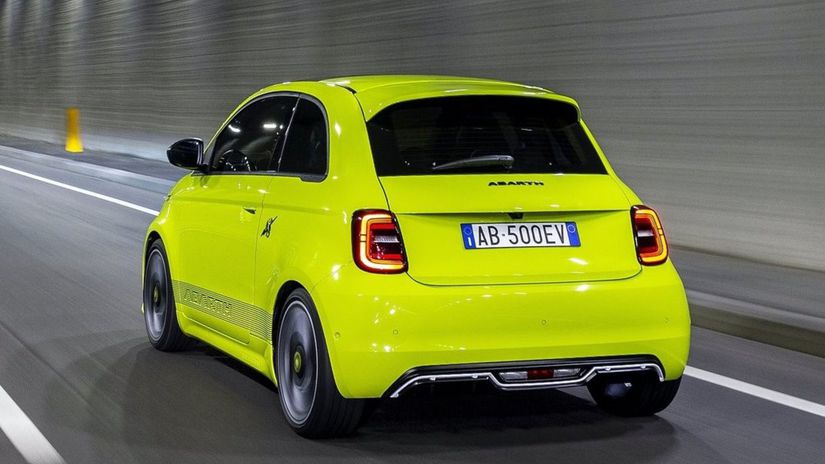 Fiat 500e Abarth – 2022 Despite the fact that a new logo debuts with the Abarth 500e, the scorpion symbols have replaced the Abarth lettering. Front and back.

Such an Abarth 695 Tributo manages the same discipline in 6.7 seconds and a regular 595 Turismo in 7.3, so it is only three tenths of a second slower. No wonder the Abarth press release is more about flexibility. For example, acceleration from 20 to 40 km/h and also from 40 to 60 km/h and from 60 to 100 km/h is about a second better for the electric novelty. According to Abarth, it also has a second better time on the ‘Misto Alfa Handling Track’. But this will not be a sufficient argument for lovers of the classics. Especially if they learn that the top speed of the Abarth 500e is a tragic 155 km/h! Its petrol siblings manage at least 218 km/h. 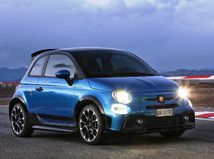 Moreover, this compromise dynamics is only available in Scorpion Track mode, because in Turismo and Scorpion Street modes the maximum output of the electric motor drops to 100 kW. In addition, a sufficient charge of the accumulator is a condition. And here we come to the further limits of the Abarth 500e. Its battery is a modest 42 kWh, which is enough for a Fiat 500e that barely sticks its nose out of town, but not a car for adrenaline-seeking customers. Dynamic driving will be severely punished by shortening the range. It should be 320 km in ideal conditions, but not if an Abarth fan is behind the wheel and is afraid to drive his electric toy outside the city limits. Charging the battery should be relatively fast, as the Abarth 500e supports a charging power of 85 kW. It should be charged to 80% in 35 minutes. 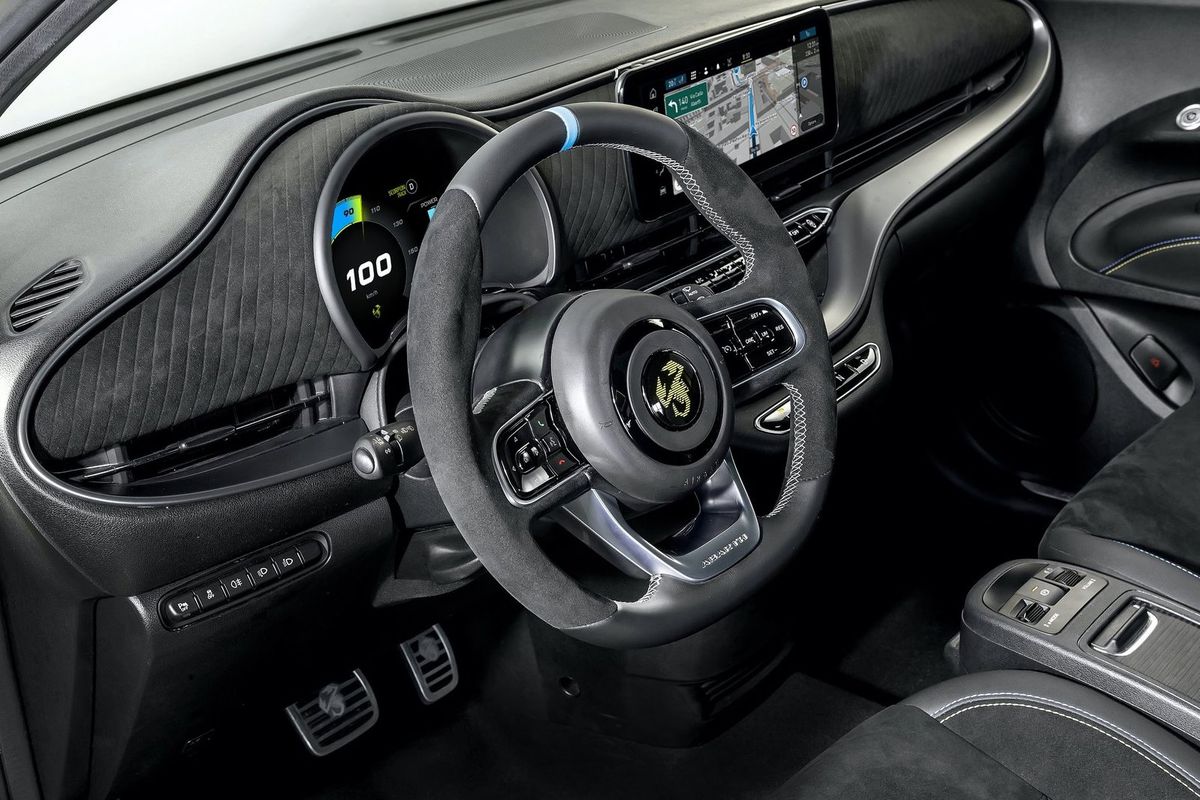 Fiat 500e Abarth – 2022 The cabin is carried in black tones. The ceiling is also black. The introductory edition of the Scorpionissima also boasts Alcantara, metal pedals and specific graphics of the 10.25-inch infotainment system.

That this is a play on the Carl Abarth legacy, although Abarth constantly refers to it in the press release, is also documented by the sound simulator. The generator emits the typical sound of an Abarth combustion engine up to a speed of 20 km/h, and in the cabin this background can be present all the time, including imitating gear shifting. Quite simply, Abarth imitates itself. Without that generator, it makes a guitar sound. The most eye-catching 500e is the attractive design with sporty bumpers, a diffuser, extended thresholds and 18-inch wheels. The whole thing is completed by the rear-view mirrors in titanium color and a completely new logo design, which makes its debut here. The cabin is dominated by dark tones and noble materials. There are black pillars and a black ceiling. There are also sports seats and typical blue straps for folding the backrests. To begin with, the “inflated” edition of the 500e Scorpionissima will be presented, of which exactly 1,949 pieces will be produced, as a reference to the year the company was founded. It has aluminum pedals, Alcantara with double stitching, a 7-inch digital cockpit and a 10.25-inch infotainment system with specific graphics. The driving characteristics should benefit from better weight distribution and a lower center of gravity compared to the classic Abaths 595 and 596. The automaker does not mention other modifications to the chassis. 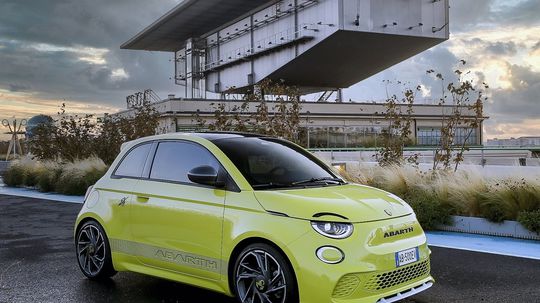 Like the price. It is also a secret. But we can forget about today’s ones, from 26,600 euros. After all, the basic version of the Fiat 500e costs 26,750 euros, which is the same as the basic Abarth with a combustion engine. But beware, with a smaller battery (24 kWh). With the bigger one, which the Abarth 500e also has, you will pay an additional 6,000 euros. So there is no doubt that the price will swing over 40,000 euros. And you’ll pay even more if you opt for the Abarth 500e in the Cabriolet version.

500e:AbarthalonefiatnewsparodyPhotopresentedScorpioscorpionyourself
By adminNovember 24, 2022AutomobileLeave a Comment on Abarth 500e: Scorpio presented a parody of itself