In the beginning, there was a photo with which a Russian war reporter boasted on a social network of meeting the owner of the Russian mercenary army in front of its headquarters in Donbass. Within a week, the headquarters building was razed to the ground by the Ukrainian artillery. 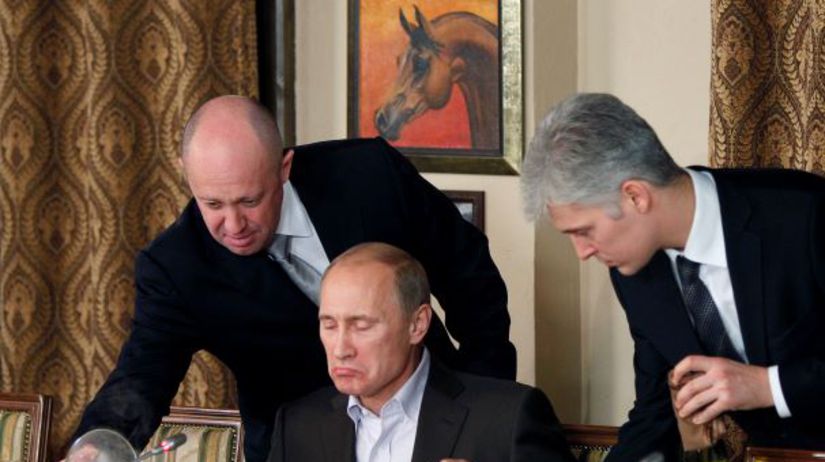 In the archive picture, Yevgeny Prigozhin serves Vladimir Putin in his restaurant near Moscow. PHOTO: SITA/AP


It was a punishingly easy target. Targeting him was a piece of cake for military intelligence. In one of the pictures from Popasna in Luhansk, where journalist Sergej Sreda posed with Putin’s cook, nicknamed Yevgeny Prigozhin (in addition to being the owner of the private army known as the Wagnerians and the St. Petersburg troll factory, he also provides the Kremlin with catering services), a sign with the address was visible nearby air defense shelter.

When another war reporter, Yuri Kotionok, reported on Sunday on his Telegram channel about the bombing of the Wagner headquarters, Sreda immediately deleted the photos from the Internet. But it was too late. At the geolocalized address Popasna, Mironovská ulica 12, there were only ruins on the site of a five-story residential building.

How many people remained under the rubble remained unknown as of Monday afternoon. The estimate of Serhiy Hajday, the Ukrainian head of the military administration of the Luhansk region, was high. “If it turns out that more than a hundred Wagnerians from the command corps were eliminated in Popasno, it will no longer be news for us,” he told Ukrainian television.

Speculations circulated on social networks that Putin’s cook may have lost his life in the attack. However, Hajdaj stated that he “cannot give good news” in this regard, but according to him, Prigožin’s representatives were in the building at the time of the attack.

Journalist Kotionok wrote that the Wagner headquarters was most likely hit by an American HIMARS salvo rocket launcher. In addition to precision-guided HIMARS missiles with a maximum range of 75 kilometers, the Ukrainian army also uses standard cannons capable of firing a precision-guided grenade up to a distance of 40 kilometers.

Popasna, which the Wagnerites captured in May after long and bloody battles, is currently about 30 kilometers from the nearest positions of the Ukrainian long-range artillery.

If it was really all as described by Kotionok and the Ukrainian media, then this is a striking case of naivety and carelessness of a Russian war reporter, reminiscent of the circumstances of the destruction of the Russian heavy self-propelled mortar Tuľpan (Tulip). The Ukrainians targeted and destroyed this unique weapon with a caliber of 240 millimeters in May near the city of Rubizhne, far away from a Russian television report.

However, some analysts are cautious when evaluating reports about the case in Popasna. Ruslan Leviev, the founder of the investigative group Conflict Intelligence Team, for example, did not rule out that the Wagnerians could have provoked the Ukrainian strike themselves. .“Remembering how much Prigozhin loves trolling and how much he was always ready to spend on it and how much effort he is ready to make, I still have some doubts about what really happened,” the expert wrote on Twitter.

“Russian military correspondents are aware of the ban on filming military equipment. And here they are posing right next to the headquarters, and even with someone similar to Prigozhin,” Leviev noted, hypothesizing that the Wagnerites might have wanted to provoke the use of the American HIMARS missile system in the hope that they would be able to target and destroy it.

Wagner’s private military company is considered one of the most capable units fighting in Ukraine on the Russian side. Moscow is covertly financing it, but at the same time it does not formally support the paramilitary group, which is not officially registered in Russia. He does not even count the fallen Wagnerites among the losses of the Russian armed forces.

In addition to mercenaries with combat experience from Syria, Libya and several African countries, Prigozhin is currently recruiting recruits from prison camps. In addition to a relatively high salary, convicts are lured by the promise of remission of the remainder of their sentence.

The former Donetsk “Minister of Defense” Igor “Strelkov” Girkin, who often criticizes the low efficiency of the Russian army when analyzing the development of the war in Ukraine, has only words of praise for Prigozhin’s private army: “The Wagnerians have their tanks, salvo rocket launchers, air defense. It is full-fledged military group.” And he gave the mercenaries his own tribute: “The Wagnerians fight like the SS Totenkopf division, they fulfill their tasks regardless of losses.”