The Zaporizhia nuclear power plant was attacked by ‘nationalists’ and ‘fascists’. According to Ukrainians, Russian, according to Russians, Ukrainian. 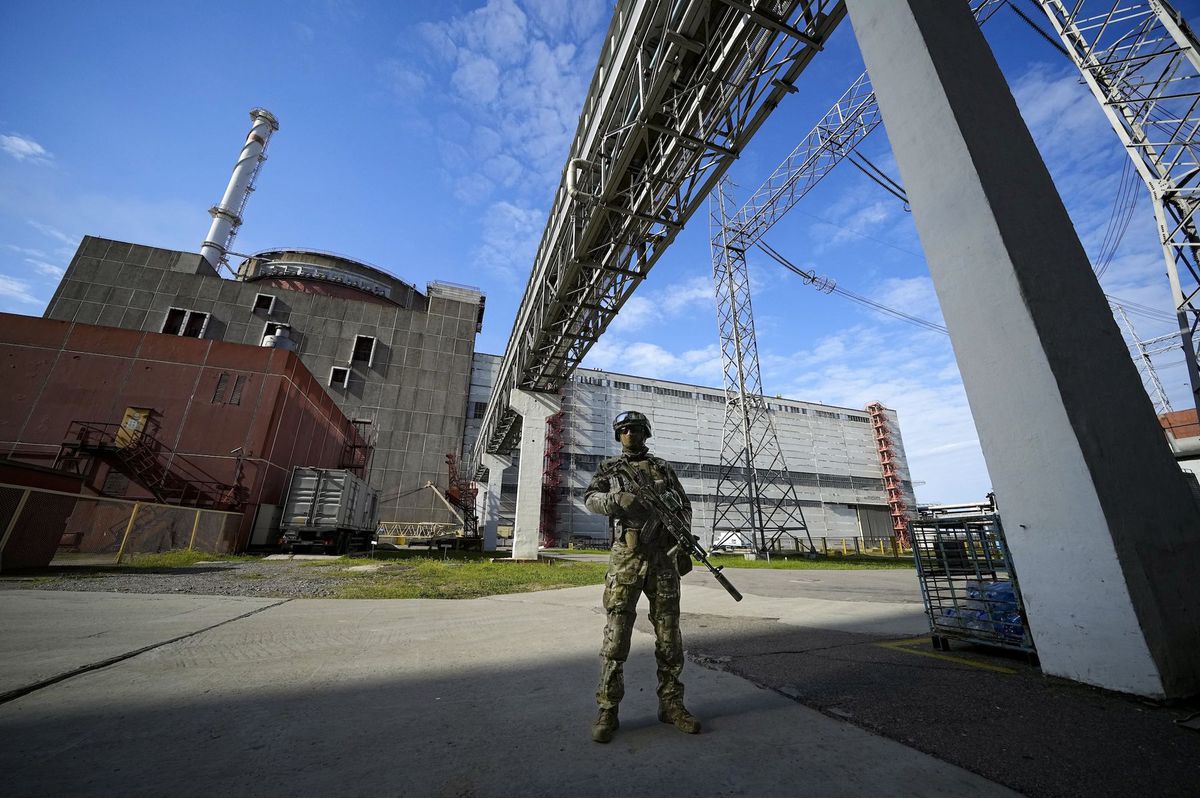 
Enerhodar – in an archive photo from May 1, 2022, a Russian soldier patrols the premises of the Zaporozhye nuclear power plant near the town of Enerhodar in southeastern Ukraine. With six units and a total installed capacity of 6,000 megawatts, the Zaporozhye Nuclear Power Plant is the largest nuclear power plant in Europe. The Russians occupied it at the beginning of March.


7:15 Ukraine and Russia on Friday they accused each other of two shellings of the Ukrainian Zaporozhye nuclear power plant, which had already been occupied by Russian troops during the invasion of Ukraine in March. According to the Russian agency RIA Novosti, which attributes the attack to Ukrainian forces, a fire broke out on the spot. The Ukrainian state energy company Enerhoatom, which on the other hand blames Russian soldiers for both attacks, said according to the Unian agency that during the second shelling the rockets landed right next to one of the blocks and that there is a danger of dispersal of radioactive substances.

“Around 15:00 (14:00 CEST), at the time when workers were changing shifts, nationalist units from the territory under the control of the Ukrainian regime carried out an artillery attack on the premises of the Zaporizhia NPP,” said an unnamed representative of the Russian-appointed Enerhodar city administration, according to RIA Novosti. , where the power plant is located. According to him, the attack cut two power lines feeding the substation, which is necessary for the safe operation of the nuclear units. Firefighters fought the fire, the agency added, referring to another unnamed source. The second shelling of the power plant took place two hours later, according to local reports, Interfax news agency reported that artillery shells hit the power plant site directly.

According to the Ukrainian company Enerhoatom, which manages nuclear power plants in the country, the vicinity of the power plant was attacked by Russian troops. “Russian fascists carried out another provocation in Enerhodar and fired in the direction of the Zaporozhye Nuclear Power Plant,” the company said. “Around 14:30 (13:30 CET), three hits were recorded near the Zaporozhské JE industrial complex,” added the company, according to which the high-voltage line was damaged in the attack.

In the evening, the company informed that Russian forces shelled the compound for the second time. “There is a danger of a hydrogen leak and the dispersion of radioactive substances,” the company said.

After the first shelling, Enerhoatom reported that the plant “despite provocations” continues to operate and supplies power to the Ukrainian power grid through a line that remains operational, but that one block of the facility has been disconnected from the grid. In the evening, Unian wrote that, according to residents of Enerhodar, the lighting in the city had stopped working. Also, the RIA Novosti agency reported that electricity and water supplies are partially not working in Enerhodar.

Both the United States and the International Atomic Energy Agency (IAEA) expressed concern about the situation at the Zaporozhye nuclear power plant, the largest similar facility in Europe, this week. The head of the IAEA, Rafael Grossi, said that the situation on the ground was out of control and extremely unstable in terms of compliance with security protocols. Although the power plant is under the control of Russian soldiers, its operation is still ensured by Ukrainian employees together with the workers of the Russian state energy company Rosatom.

attackattackedblamefascistsnuclearonlineplantpowerRussiansthey attackedUkrainianswar in Ukraine
By adminAugust 6, 2022GlobalLeave a Comment on ONLINE: The ‘fascists’ attacked. Both the Russians and the Ukrainians blame each other for the attack on the nuclear power plant