Also in Bucharest on Tuesday, according to the Reuters agency, the NATO foreign ministers confirmed the conclusions of the NATO summit from 2008, which envisage that Ukraine may eventually become a member country. However, the alliance has not taken any concrete steps in this regard since then. 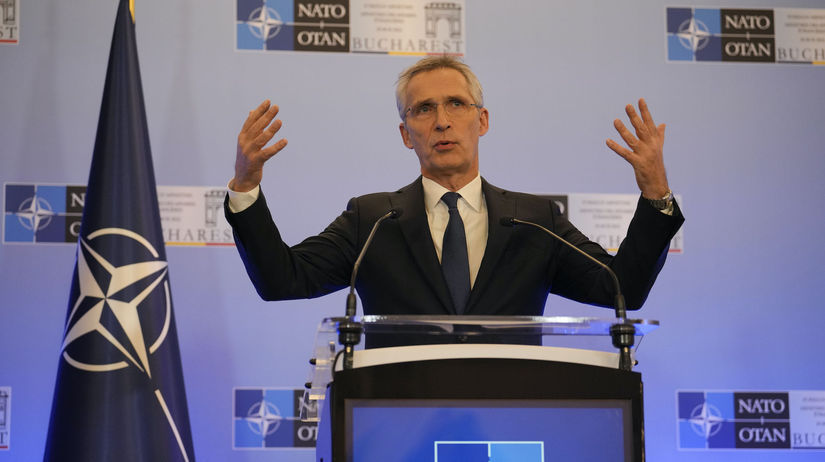 
NATO Secretary General Jens Stoltenberg speaks during a press conference after the opening day of a two-day meeting of foreign ministers of NATO member states in Bucharest on Tuesday, November 29, 2022.


6:15 According to the Secretary General of NATO, the Tuesday meeting of NATO foreign ministers also discussed whether NATO should provide Patriot air defense systems to Ukraine. For example, German Foreign Minister Annalena Baerbock was skeptical about such a possibility after the negotiations.

“We proved that we can defeat Russia, we proved that we can win together in the interest of the entire Euro-Atlantic world,” Ukrainian Minister Dmytro Kuleba said in a joint statement to the media with Stoltenberg. “Faster, faster, faster,” he also noted, adding that this is exactly what Ukraine needs right now, whether it’s the supply of weapons or generators.

Also in Bucharest on Tuesday, according to the Reuters agency, the NATO foreign ministers confirmed the conclusions of the NATO summit from 2008, which envisage that Ukraine may eventually become a member country. However, the alliance has not taken any concrete steps in this regard since then.

The Deputy Chairman of the Russian Security Council, former President and former Prime Minister of Russia, Dmitry Medvedev, warned the North Atlantic Alliance on Tuesday not to supply any Patriot systems to Ukraine. He described NATO as a criminal organization.

“If, as Stoltenberg suggested, NATO would supply Patriot systems to Ukrainian fanatics along with alliance soldiers, they would immediately become a legitimate target of our armed forces,” Medvedev wrote in a telegram.

Stoltenberg already expressed his belief on Monday that Russia will continue its attacks on Ukraine’s energy network, gas infrastructure and basic services. Because of them, even six days after the last wave of these attacks, Ukraine still lacks approximately 30 percent of electricity, Ukrainian Prime Minister Denys Shmyhal said.

The North Atlantic Alliance will support Ukraine as long as necessary, the head of this organization, Jens Stoltenberg, assured in Bucharest. It is important that Russian President Vladimir Putin does not win in Ukraine, he also said after the first day of the meeting of NATO foreign ministers. According to him, it would be a tragedy not only for Ukraine.

“We are all shocked by the attacks on Ukrainian cities and Ukrainian infrastructure. President Putin is trying to deprive Ukrainians of water, electricity, heating, light. It uses winter as a weapon,” Stoltenberg said. According to him, it is all the more important to support Ukraine.

“We will not back down,” added the Secretary General. If Russia, which invaded Ukraine in February, succeeded, the whole world would become more dangerous and vulnerable, according to him.

LegitimateMedvedevNATOonlinePatriotsRussiaStatestargetsthreatensUkrainewar in Ukrainewill get
By adminNovember 30, 2022GlobalLeave a Comment on ONLINE: Will Ukraine get Patriots from NATO states? Medvedev threatens to be ‘legitimate’ targets of Russia