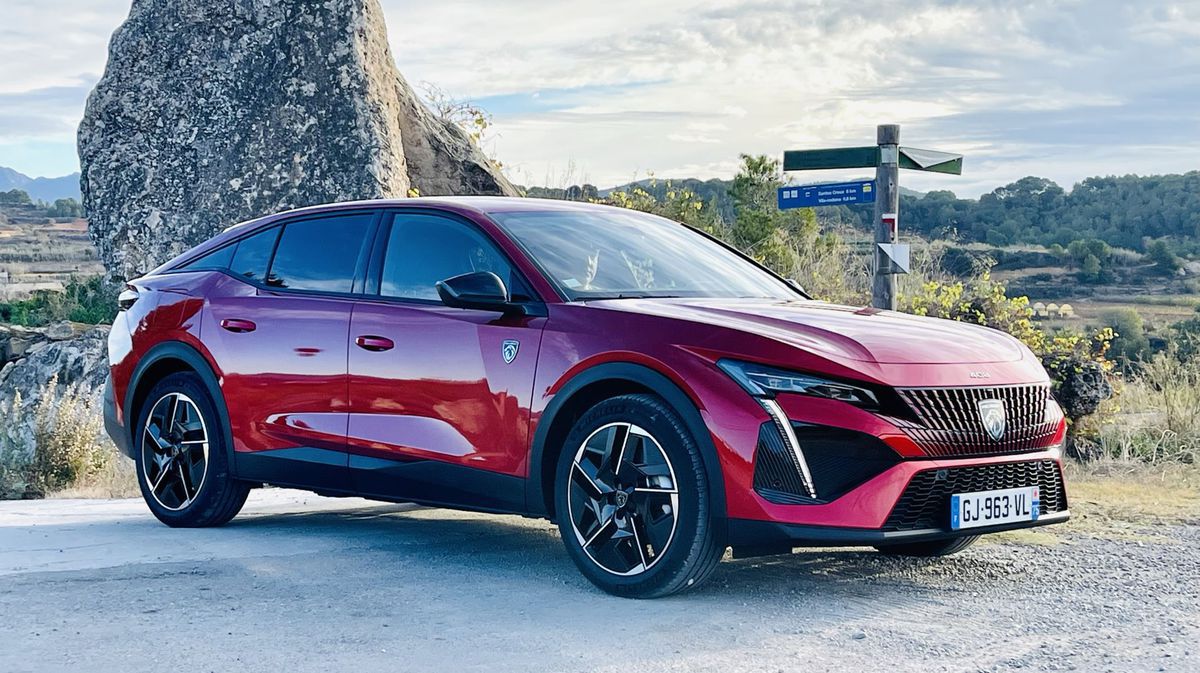 Peugeot 408 plug-in hybrid (2022) Peugeot 408 is an extravagant car at the interface of several categories.

It’s rare for a car company to keep the unveiling of a new model under wraps until the very last minute – no “as if” photo leaks, no teasers, no advance information. Therefore, when Peugeot presented a new model with the designation 408 in June, it was a huge surprise for many. It immediately caught the eye with its “a little bit of everything” bodywork. It is something between an elevated station wagon, a fastback and a crossover. With a bit of lightness, it can be said that it is a kind of automotive “gender bender”.

A few months passed and we got the opportunity to drive the first kilometers with this interesting car around the Spanish town of Sitges near Barcelona. When we looked at it more closely, from our point of view it is aimed at the same target group as its sister Citroën C5X, with which it also shares the same engine. 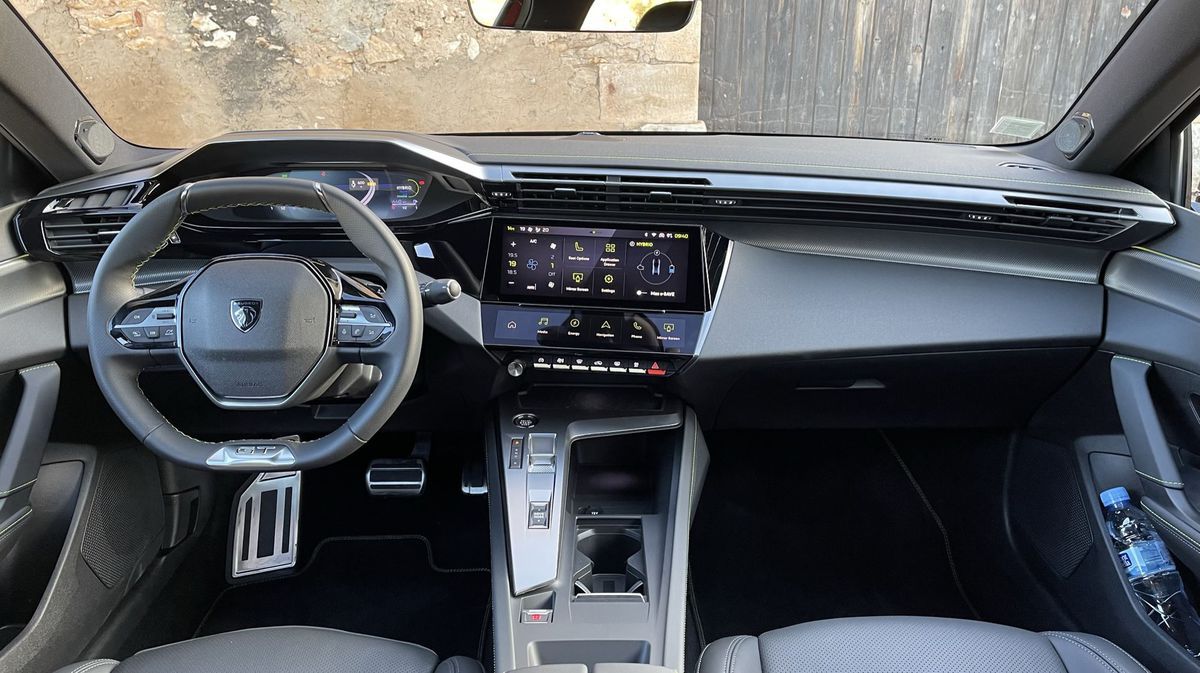 In this case, the singular is appropriate. Currently, the C5X is produced only as a plug-in hybrid, the Peugeot 408 will also initially be available exclusively as a plug-in hybrid with a system output of 180 or 225 hp (133 or 165 kW). In addition, a gasoline engine with a turbocharged 1.2-liter PureTech engine will go on sale “later” in Europe, which will offer 96 kW (130 hp) and a torque of 230 Nm. A purely electric version will also be launched “even later”.

Outside of Europe with its emission obsessions, the 408 will also have a classic 215-horsepower THP four-cylinder gasoline engine under the hood. It is a global model that should be sold in more than 90 countries. Although the plug-in hybrid makes it theoretically possible, it does not count with a 4×4 version, just like with any diesel engine.

When, in the presence of the French engineers and designers associated with the development of the new Peugeot 408, we expressed the opinion that it was aiming for the same “target” as the Citroën C5X, they strongly objected to it. According to them, the citroën is 118 mm longer, a little higher and overall it is more of a crossover, belonging to the D segment, while the Peugeot 408 is aimed at the C segment. Moreover, according to them, the 408 is more hi-tech, driver-oriented and is ” trendsetter”. 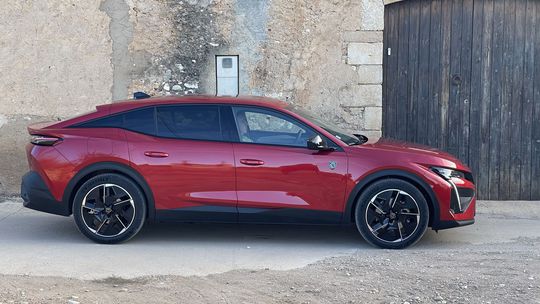 However, these are purely marketing constructs. When deciding to buy a car, no one thinks in the style of “I would like some ‘fasa’ station wagon from the C segment”. It compares design, price, performance, interior space, trunk size and safety. The trunk and the wheelbase, which limit the interior space, are almost identical for both French models, they have the same engine and both look really great.

However, the Peugeot engineers were right about one thing, and we found it out after the first tens of kilometers. The new Peugeot 408 is really more driver-oriented and the driving experience, while the Citroën C5X is clearly focused on comfort. But more on that later. 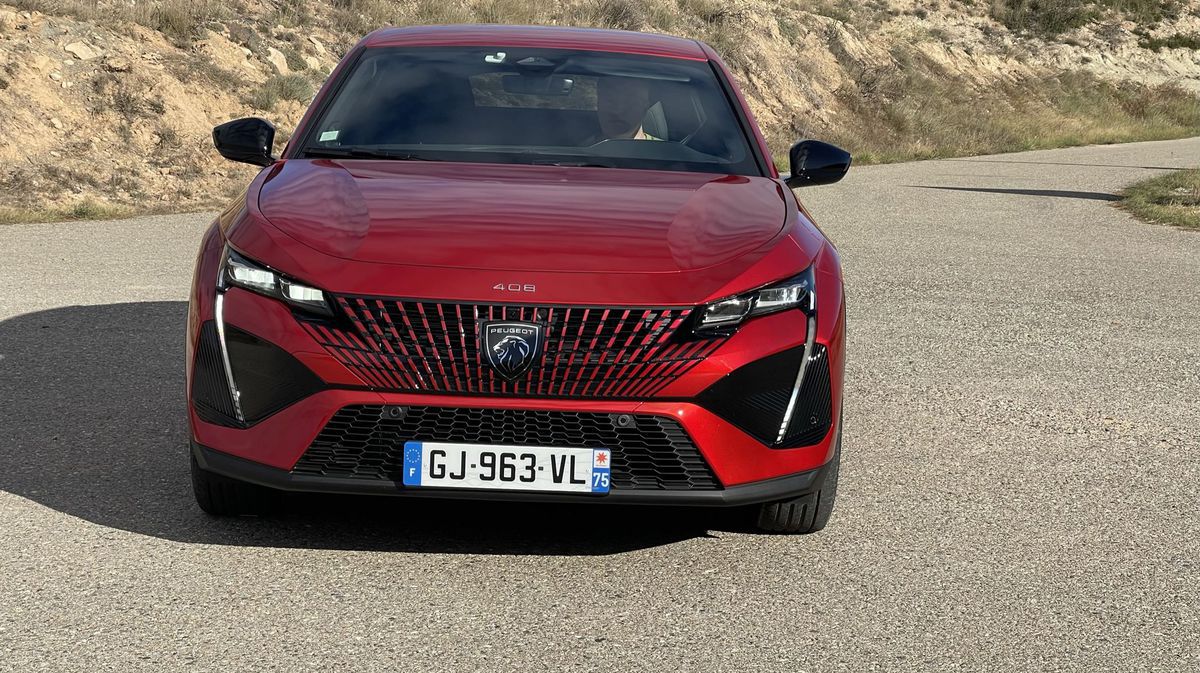 In terms of appearance, the designers also named another difference. According to them, the C5X is a crossover, while the Peugeot 408 is more of a station wagon with better ground clearance. They also argued that practically up to the B-pillar, the Peugeot 408 is the same as the Peugeot 308, including the interior design. The significant difference is that the 408 has up to 40 mm better ground clearance (189 mm) and, of course, the design of the rear part is fundamentally different for both cars.

Notice, for example, the massive unpainted rear bumper, which at first glance doesn’t even seem to belong to the car. However, it lends it a slightly rougher look, typical of crossovers or smaller SUVs. From our point of view, it would not be a shame if, at least for an additional fee, it was painted in the body color. However, this option is not available. However, the radiator grille is painted in body color and it looks really good.

We were also impressed by the retro 20-inch “geometric” wheels, somewhat reminiscent of those used on cars some thirty years ago. (Look at them in the gallery, they are on the green car. On the red one we tested, we wore 19s with a different design. And speaking of the “green” one, the French rely on it because it changes shade. From a different angle, it looks blue .) 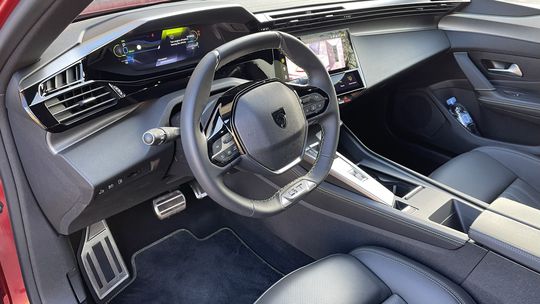 The Peugeot 408 also relies on its hi-tech equipment. Just for the sake of interest – the assistance systems use six cameras and nine radars. Also thanks to their cooperation, night vision was added to the car’s equipment. This makes it possible to recognize people and animals in front of the vehicle in the dark and at a distance greater than the range of dipped headlights. It displays infrared images on the digital instrument panel in the driver’s field of vision. This is part of the i-Cockpit ergonomic solution, which the Peugeot 408 uses in the same way as other new models of this French brand.

The car’s equipment also includes LED-matrix headlights, adaptive cruise control, automatic emergency braking, extended recognition of traffic signs or warning of an obstacle when backing up. During the first quarter of next year, the Drive Assist 2.0 package will also be added to the equipment. It will include, in addition to the already available adaptive cruise control with the Stop and Go function and the system for maintaining the vehicle in the selected lane, two new functions: semi-automatic lane change, which will offer the driver to overtake the vehicle in front and then the possibility to rejoin the original lane ( works at speeds from 70 to 180 km/h) and early speed change recommendation based on reading signs.

Excellent on the road

But let’s see how the new Peugeot 408, built on the EMP2 platform, drives. He really pleasantly surprised us with his chassis tuning. In corners, the car leant a lot less than we expected and managed to filter bumps quite well – even on the big 20-inch wheels. In addition, the cabin is excellently soundproofed.

Aerodynamic noise penetrates it only minimally, as well as noise from rolling wheels. So you can really enjoy high-end Focal audio (10 speakers, 690 W power and 12-channel amplifier) ​​with a subwoofer in the trunk, in which its installation takes a few liters. Even with it, the trunk has a respectable 456 liters and a symmetrical shape. 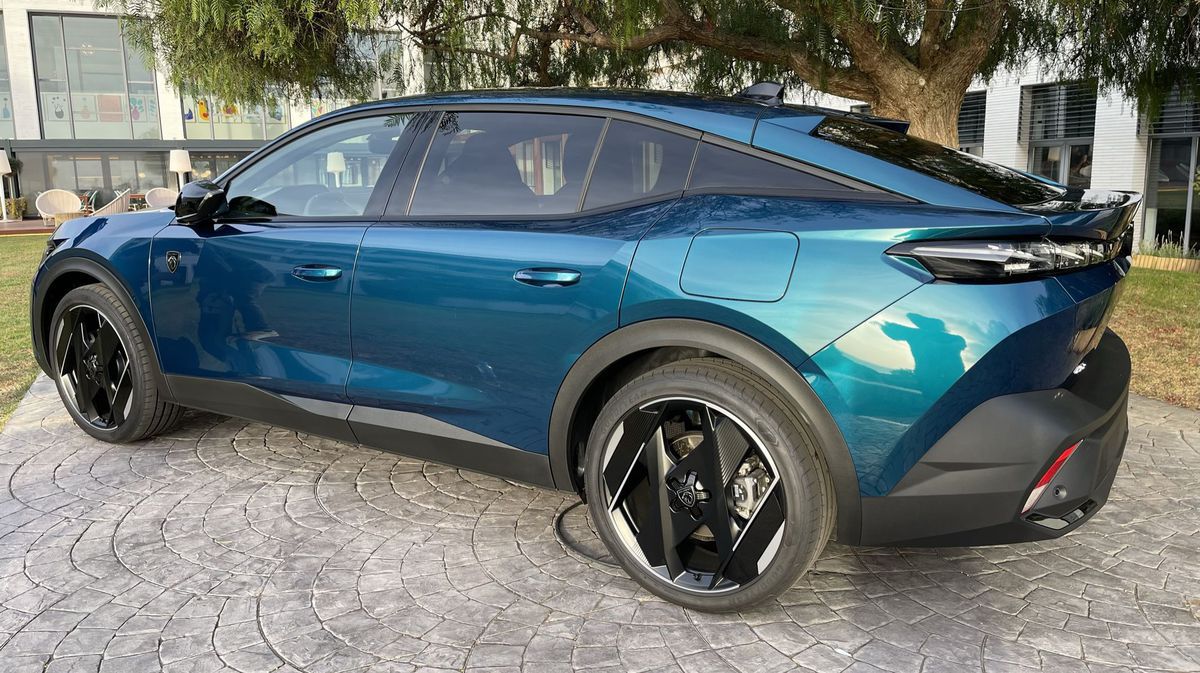 Peugeot 408 plug-in hybrid (2022) This car had rather eccentric “geometric” 20-inch retro wheels. We were quite impressed.

Under the hood, we had a more powerful plug-in hybrid with a total (combined) maximum output of 225 hp (165 kW). The combination of a 1.6-liter gasoline engine with an output of 180 horsepower and a 110-horsepower electric motor took care of it, which transmitted power to the front axle.

The usable capacity of the battery is less than 10 kWh, which according to the WLTP test procedure should be enough for more than 60 kilometers of purely electric range in combined mode. We drove only less than 300 kilometers with the car, which is not enough to make any relevant judgments about the electric range. There will be time for that after the standard weekly test. 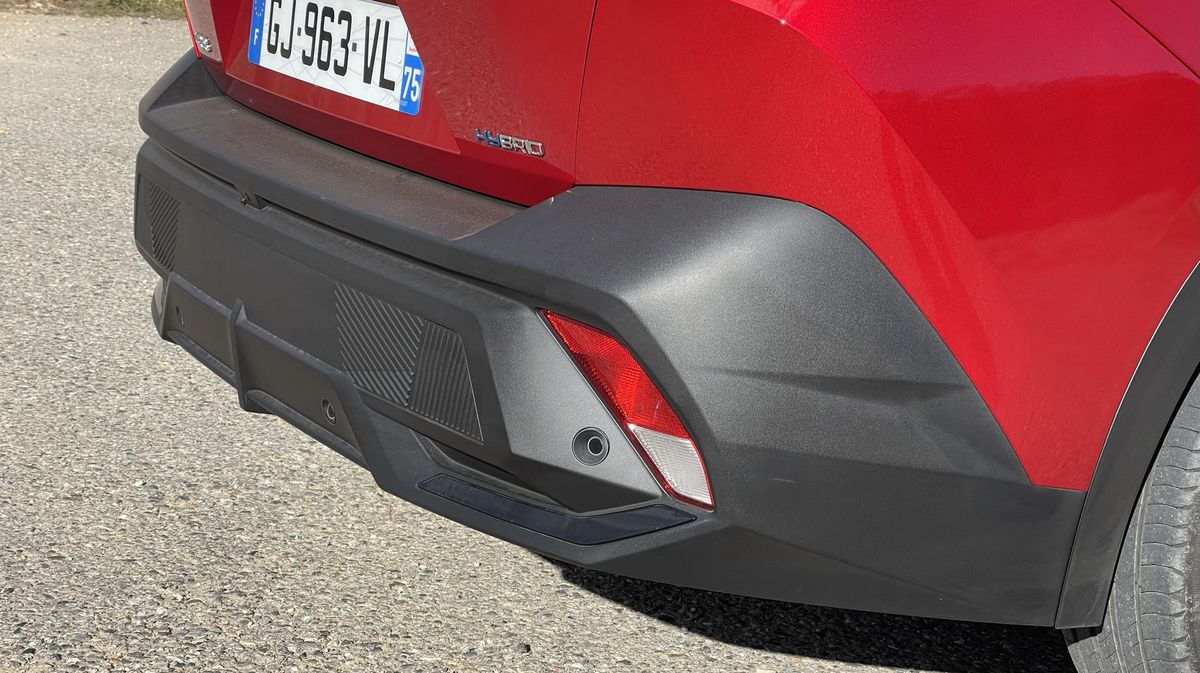 It bothers us a bit that the slower on-board charger with a power of 3.7 kW has remained standard, a stronger one with a power of 7.4 kW will only be available for an additional fee. For what, we do not know yet, because the Slovak price list of the car has not yet been published at the time of writing this text, and therefore we do not know exactly what will belong to the individual equipment levels. So far, we have seen the French price list, in which the price of the tested 225-horsepower plug-in hybrid is set quite confidently. However, before we evaluate, let’s wait for the official Slovak price list, where they say the prices could be lower compared to the French ones.

Let’s go back to the behavior of the car on the road. The cooperation between the electric motor and the internal combustion engine is really excellent. The electric assistance allows the Peugeot 408 to make dynamic starts and responds excellently to the instructions of the accelerator when overtaking. Of course, electric assistance also helps with low consumption. Until the battery was dead, we kept the average at the level of four liters, or just below them. When it ran out of power, our average increased to about 6.7 liters. In sport mode, the car responded much more immediately to pressing the accelerator, but it seemed to us that even in this setting the gearbox returned to the “more economical range of revolutions” quite quickly, which is perhaps a bit of a detriment. 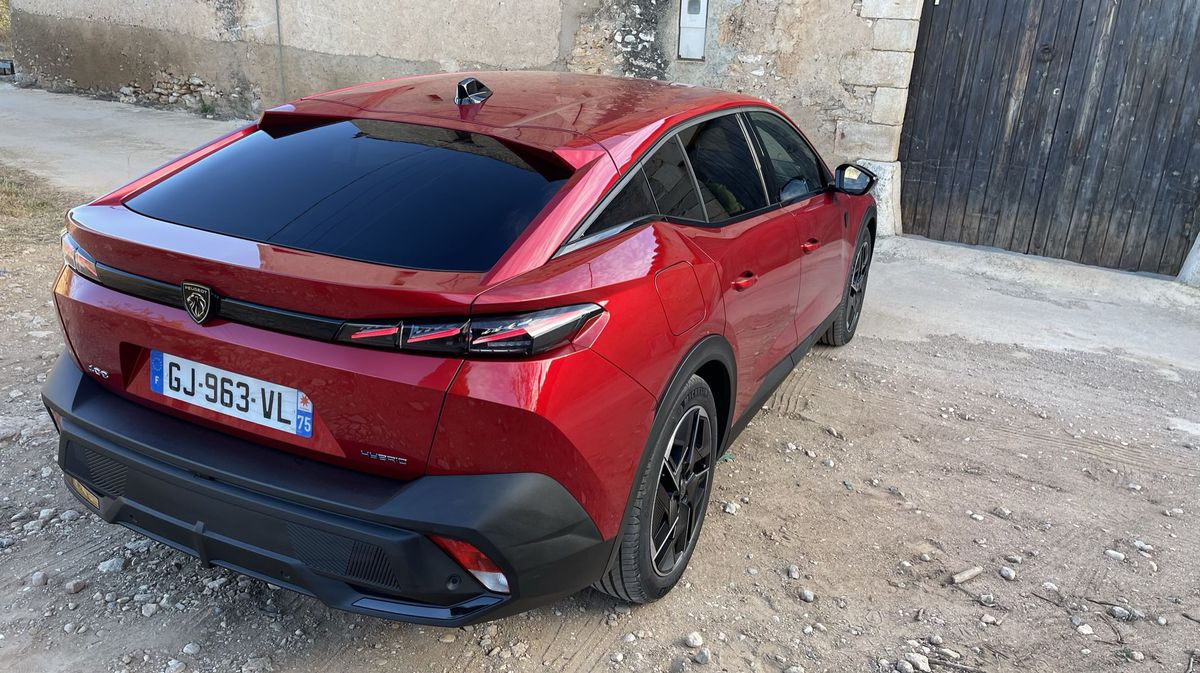 Peugeot 408 plug-in hybrid (2022) At the back, there is the typical light signature of Peugeot models.

After the first kilometers spent behind the wheel of this interesting car with an eccentric design on the border of several categories, we can say that it pleasantly surprised us with its balanced driving characteristics, very decent travel comfort and noise reduction. We are curious about the real electric range, which we did not have the opportunity to verify during a short test.

And maybe even more for the classic gasoline engine with a volume of 1.2 liters and an output of 96 kW (130 hp), which could be an economically interesting alternative in our region, especially thanks to the lower price. When we look at the already mentioned French price list, the difference between the basic 130-horsepower gasoline version and the more powerful 225-horsepower plug-in hybrid we tested is almost 11,000 euros. The question is how much the downsizing unit will actually “suffer” with this large and therefore heavier car and what it will do to real consumption.

drivespeugeotpeugeot 408plug-in hybridself testSpainTesttest car
By adminNovember 27, 2022AutomobileLeave a Comment on Test: In Spain, we found out how the new Peugeot 408 really drives