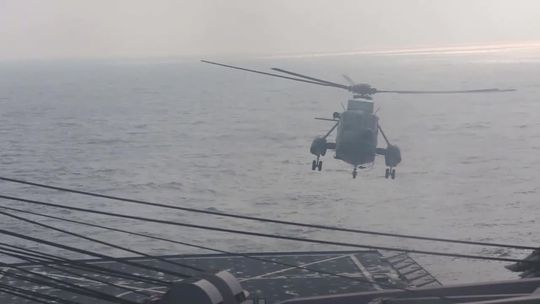 Britain will deliver three rescue and search helicopters to Ukraine, Defense Minister Ben Wallace announced. It is the first time since the beginning of the Russian invasion that the British army is sending manned vehicles to Kyiv, the BBC reported.

The first of three Sea King helicopters, which served in the Royal Air Force and Royal Navy until 2018, has already been taken over by the Ukrainian army. In recent weeks, Ukrainian pilots have been trained to fly these machines in Britain.

London will also send another 10,000 artillery rounds to Ukraine, Wallace said during a visit to Norway, where he is participating in negotiations to strengthen military cooperation between the Nordic countries.

Since the beginning of the invasion in February this year, only a few countries have sent manned aircraft to Ukraine. They probably also include the Czech Republic, which, according to available information, handed over Mi-24/35 combat helicopters to Kyiv. Requests by Ukrainian officials for the supply of fighter jets have so far been left unanswered by Western countries.

In recent days, The Telegraph reported that Britain also supplied laser-guided Brimstone missiles to Ukraine, which are primarily intended for the destruction of armored vehicles. Compared to the previously delivered missiles, this is an improved version with twice the range. According to the newspaper, the missiles, which are usually equipped with airplanes or helicopters, are fired from cars by the Ukrainian army.

VIDEO: See what the Black Hawk helicopter can do without pilots

At the weekend, Prime Minister Rishi Sunak used a visit to Kiev to unveil a new £50m defense aid package, which includes 125 anti-aircraft guns and other anti-drone equipment that Iran is supplying to the Russian military. At the beginning of November, London announced the delivery of another thousand surface-to-air missiles. The UK also provides winter equipment to the Ukrainian army and participates in the training of Ukrainian soldiers.

againstBritishcolorfightKingRussiansseasendthey sendUkrainianswar in Ukraine
By adminNovember 23, 2022GlobalLeave a Comment on The British send the King of the Sea to the Ukrainians to fight against the Russians