The Pakistani branch of the Afghan radical Taliban movement has announced that it will no longer respect the ceasefire it concluded with the government in Islamabad in June this year. At the same time, she ordered her fighters to launch attacks across the country. TASR took over the report from the AFP agency.

“As military operations against the Mujahideen are underway in various areas, it is imperative that you launch attacks anywhere in the country,” the statement said.

The Tehreek-e-Taliban Pakistan (TTP), which has a similar Islamist ideology to Afghanistan’s ruling Taliban movement, has been responsible for dozens of violent attacks and hundreds of casualties on Pakistani soil since its inception in 2007. 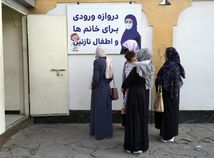 Read more The Taliban has banned Afghan women from visiting public baths, they have to make do with bathrooms

TTP ruled over part of the so-called tribal areas in Pakistan, where it applied its radical interpretation of Islamic law, reminds AFP. Its fighters have been gradually pushed out of the Pakistani border into neighboring Afghanistan since 2010, but they have been encouraged by the Taliban’s return to power in Kabul.

The group agreed to a ceasefire with the Pakistani government in June. However, both sides have repeatedly claimed that the ceasefire is not being observed and that there are many skirmishes, writes AFP.

Afghanistanattackdidn't lasthalf a yearIslamistsmonthsorderedpakistanpeaceseataliban
By adminNovember 28, 2022GlobalLeave a Comment on The peace did not even last six months. The Taliban in Pakistan ordered an attack